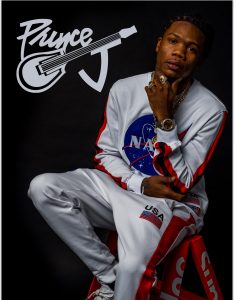 Southern made straight out of Georgia, Terrence Jones known as “GPM (Get Paid Mafia) Prince J.” An eastside Atlanta hip hop artist with a flow unique in style with
a story to solidify everything his words feed the world about his experiences. Terrance was raised by a single mother after his father was murdered during a home invasion when he was in first grade. His mother pursued a career in law enforcement and eventually became a sherriff and married his stepfather Dale Warren. His stepfather was a famous orchestra player signed to Motown. Although he was just a kid, memories of being at the studio with his stepfather include growing up around musical geniuses like Chaka Khan, Isaac Hayes and Jagged Edge. Being around the greats influenced Terrence to explore his passion for music and to express his life through lyrics. He recorded his first record on a karaoke machine. Unfortunately, his step father passed when he was just six years old.
With a destination of becoming a hustler imbedded in his DNA, Terrence ignited his legacy as a boss at the age of 12. He landed his first $100,000 play and never looked back. Savoring the limited time that he did have a father figure, Prince J adjusted to moving solo and quickly learned how to run the streets of the eastside of Atlan- ta. Relentlessly he resided in the streets subsequently catching a gun charge at 14. Forced by the courts, he had to make a choice between going to prison or mil- itary school. His entrance into manhood led him to a positive change that would impact him for the rest of his life. He made the decision to go to the Youth Challenge Military School located on the Fort Stewart base and obtained his high school diploma at the age of 16. He continued his educational path and received his associ- ate in Dentistry at the United Education Institute and his Bachelor’s in Film from Fullsail University. Utilizing his full potential in all aspects of life is the most important element of who Terrence Jones is.

Terrence was shot during a robbery in 2017, where he returned gunfire, fatally injuring the assailant. Blessed by the Grace of God, prison was not in his plan and Ter- rence forged ahead in his journey of entrepreneurship. With an urgency to gain a legit life, “Prince J” united his street knowledge, education, and own money to create the label Get Paid Mafia, along with a film company Top of the World Productions. He created a buzz on the east side of Atlanta and became known in Lithonia for doing music, writing scripts, producing videos and photog- raphy. Throughout his journey he has done shows all around the Southeast and works closely with super producer Drumma Boy Fresh. His biggest influences in music are 2Pac, Lil Boosie, Jay Z, and Pimp C. Maintain- ing consistency as his focal point, his music is strictly about the ins and outs of the streets. His history of street involvements are real happenstances that people can truly relate too.
Currently Lucciono the Great is signed to the label.