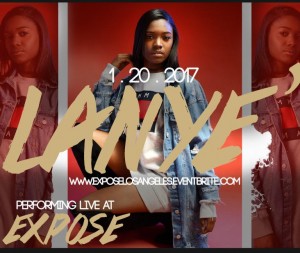 This hot new artist is on fire right now with her new project.

Expose will feature new hit sensation Lanye’. Lanye’ Marsha’e Jenkins, (born November 15, 1996) known by her stage name LANYE’ is an American singer best known for being a member of the girl group “Phenix Rose”.
At the age of 13, LANYE’ performed Monica’s “Angel of Mine” at the House of Blues on Sunset to a standing ovation and was approached by Hollywood actress Meagan Good to audition for a new girl group that she wanted to form. With much excitement, LAYNE’ was selected as one of the founding members of “Lil Ms” (later changed to “Phenix Rose”).
Phenix Rose comprised of five young girls, went on to record many songs including features with Lil Mama and Mindless Behavior. The group performed at many special events and high schools including Nick Cannon’s School Tour, A Semi-Pro football game in San Diego with singer Ray J, and also Lil Kim’s fashion show in North Carolina. In 2014, the group started working with Grammy Award winning producer, Harmony Samuels who made a big impact on their musical style.
After begin in the group for five years and multiple changes within the group, LANYE’ decided to leave to pursue her solo career, saying “I will always appreciate the journey being apart of the group and the special bond between me and my girls but sometimes God just has a different plan for you.” LANYE’S musical influences are Toni Braxton, Brandy and Beyonce. 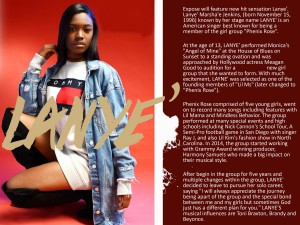